Blog - Latest News
You are here: Home1 / Our Pastor

John Samson is the founding pastor-teacher of King’s Church in Peoria, Arizona, as well as an author and conference speaker. He has a passion for the local Church and for the free offer of the gospel to be proclaimed far and wide. Inspired by a deep desire to proclaim the truth of the Bible without compromise, John is known for his simple, down to earth, verse by verse, expositional preaching. His passion is to proclaim God as He really is, and the Gospel as it really is, believing that it is impossible to have one without the other. In light of this, he is happy to affirm historic creeds and confessions of the Church as well as the five Solas of the Reformation and the Doctrines of Grace.

John was born and raised in the historic city of Chester, England, situated around 20 miles south of Liverpool. Chester was originally founded as a Roman fort with the name Deva Victrix in the year 79 AD during the reign of the Emperor Vespasian. Desiring to become a professional football player (football is known as “soccer” in the USA), he was chosen for the Chester Under 19 side while still only 16 years of age. However, the Lord had a different and more exciting path, calling him into the ministry!

Graduating from the Regents Theological College in England in 1987, John began his ministry as the Associate of the late Harry Greenwood. (Below is a photo of John and Harry together, taken in November, 1987, in Kerala, India). For many years John hosted a live 2 hour Christian television program on the Trinity Broadcasting Network as well as a 30 minute daily Bible teaching radio broadcast, “the Spirit of Faith,” covering central Arizona. Since then, the Lord in His great kindness has brought John out of much theological error and deception. 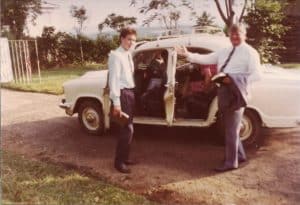 June, 2022 will mark 35 years in Christian ministry for John. In this time he has pastored churches in both England and the USA, and has included ministry trips to Europe, Australia, New Zealand, India and Mongolia, in Churches, Camps, Conferences and Gospel outreach.

Sensing God’s call to live and serve in the USA is very much a long term assignment, John became a full USA citizen in February, 2003.

(1) “Twelve What Abouts – Answering Common Objections Concerning God’s Sovereignty in Election” has been widely distributed, helping many come to a new and fresh understanding of the grace of God. It is available for purchase in paperback here and in e-book here. It is also now available in the Italian language.

(2) “The Five Solas – Standing Together, Alone” can be purchased in paperback at this link as well as in eBook and audio-book version here.