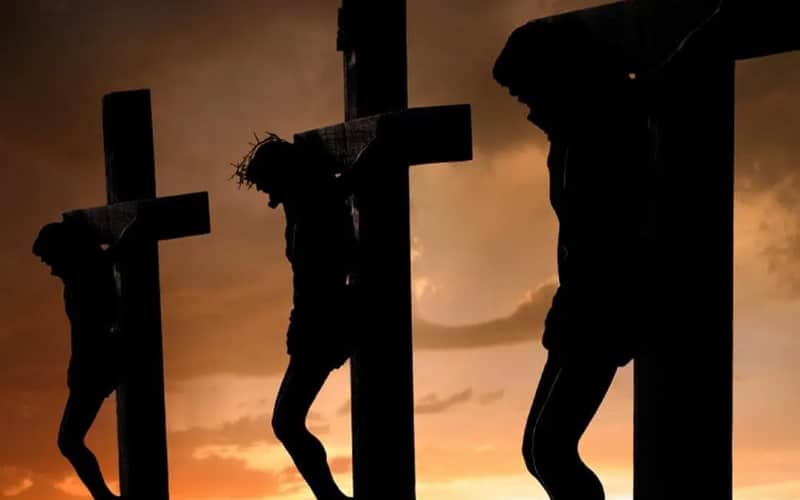 THE THIEF ON THE CROSS

Luke 23: 39 One of the criminals who were hanged railed at him, saying, “Are you not the Christ? Save yourself and us!” 40 But the other rebuked him, saying, “Do you not fear God, since you are under the same sentence of condemnation? 41 And we indeed justly, for we are receiving the due reward of our deeds; but this man has done nothing wrong.” 42 And he said, “Jesus, remember me when you come into your kingdom.” 43 And he said to him, “Truly, I say to you, today you will be with me in Paradise.”

I have often contemplated the potential scene in my mind as one by one, the proponents of all religions were given the opportunity of talking to the thief on the cross, and what they would say to him. This was a man who was a criminal, a notorious sinner, and definitely, one whose so-called “bad deeds’ would outweigh the good ones. Being nailed to a cross negates any further opportunity for good works to be done. But it would be an interesting conversation, wouldn’t it, to hear what each religionist might say to him? In every case (apart from perhaps universalism which falsely teaches that all people will be saved regardless of their works) each religion would require the man to somehow come down from the cross to DO something.

What would a spokesman for Islam say? How about a Mormon or Jehovah’s Witness? What would a Buddhist say? or a New Age guru? How about a Roman Catholic? If each could speak to this man, what religious advice would or could they give to him for the purpose of being saved (however they even define what that means)? Some might say that all he could do would be to hope for mercy, but Christ, the biblical Christ gave him far more than just hope. In contrast to what all man-made religious systems could give the man, Christ gave him full assurance of salvation – and not just eventual salvation after countless years in the fires and torments of purgatory, but bliss and paradise that very day!

Certain religions would require baptism, others would require the man to go through religious instruction and devotion of some sort, while others would ask him to do more good works before his death hoping that they might outweigh the bad ones. But here’s my point, the man could never find salvation in those religious systems because he was stuck, pinned, nailed to a cross. His chance to help elderly people cross roads, or to give to charity or to live a life of service was gone. Nailed to a cross, works and service were no longer possible. His was a totally hopeless case.. except that crucified next to him was Someone who was able to save him by what He was doing, rather than what the man might do. Only the real biblical Jesus with the real biblical Gospel could announce to a criminal that before the day was over, he would be with Him in Paradise.

As far as I know, this man was the only person that Jesus gave instantaneous assurance of salvation to. Jesus’ words, “Today you will be with Me in Paradise” removes all doubt.

So, he had an awareness of divine judgment, he knew the availability of forgiveness, he believed Christ was the true King and that in Christ there is hope even for him, he knew of the coming Kingdom and wanted to be a part of it.

Question 60. How are you righteous before God?
“Only by true faith in Jesus Christ; that is, although my conscience accuse me, that I have grievously sinned against all the commandments of God, and have never kept any of them, and am still prone always to all evil; yet God without any merit of mine, of mere grace, grants and imputes to me the perfect satisfaction, righteousness, and holiness of Christ, as if I had never committed nor had any sin, and had myself accomplished all the obedience which Christ has fulfilled for me; if only I accept such benefit with a believing heart.” – Heidelberg Catechism