Watch Out For The Wolves In Sheep’s Clothing

Jesus gave His disciples the following warning: “Beware of false prophets, who come to you in sheep’s clothing but inwardly are ravenous wolves…” (Matt. 7:15). He warned that these wolves dress themselves in sheep’s clothes, but their intention is very clear; hungry for blood, they seek to devour God’s people. He then said that we would recognize them by their fruit.

Using the same kind of imagery, the Apostle Paul said, “I know that after my departure fierce wolves will come in among you, not sparing the flock; and from among your own selves will arise men speaking twisted things, to draw away the disciples after them. Therefore be alert, remembering that for three years I did not cease night or day to admonish everyone with tears. And now I commend you to God and to the word of his grace, which is able to build you up and to give you the inheritance among all those who are sanctified.” Acts 20:29-32

Paul makes it clear that a hallmark of the wolves is that they speak “twisted things” with the intention of drawing away Christ’s true sheep from the fold. The “twisted things” here (other translations speak of “perverse things” or distortions of the truth) is a reference to the false teaching of these wolves. It is a clear warning to be vigilant and on our guard against false doctrine.

There are many wolves seeking to devour Christ’s sheep, and it is true to say that many of the cults or false prophets of our day fill their ranks with many who once professed orthodox views of the Christian faith. The false teachers use very subtle deception, often using the same exact words as Christians, but are using a very different dictionary with a very distorted meaning.

The Jesus of these false teachers is not the Jesus of the Bible, and of course, it is only the real Jesus, the Jesus found in Scripture who can actualy save. That’s because the other Jesus’ do not actually exist in reality.

We are not talking here about minor disagreements, but fundamental big picture issues. The “God” of these false prophets is not the same as that of the Bible; “salvation” means something entirely different and the means to be saved often makes some reference to Christ (which is why it is so deceptive), but it is never Christ alone who saves, but Christ plus the contribution we are all supposed to make to the cause.

In contrast, biblical salvation is by grace alone, received through faith in Christ alone, all to the glory of God alone, and works (the things we do) play no part, except that they are the fruit of a life transformed by Christ. The Scripture in Ephesians 2:8-9 tells us, “For by grace you have been saved through faith. And this is not your own doing; it is the gift of God, not a result of works, so that no one may boast.” The things we do (works) are the fruit, not the root of our salvation.

It is not our job to try to judge the motives in people’s hearts. That is something God knows for sure, but often times, the wolves look a lot like sheep, because they act and dress like the true sheep in order to draw away their followers. What we can do is pay attention to their teachings and compare it to the Scriptures and see if they measure up.

Scientology, Unification Church, Christian Science, Christadelphianism, Oneness Pentecostalism, Open Theism, Universalism, Eastern Orthodoxy, Roman Catholicism, New Age, Wicca and Occult teachings are so prevalent today, spreading their false doctrines far and wide (The Watchtower organization of Jehovah’s Witnesses and the Church of Jesus Christ of Latter Day Saints (LDS or Mormonism) are discussed further below). For those with questions about these groups, I recommend the Watchman Fellowship website here and the Christian Apologetics and Research Ministry site here.

You might be surprised to see Eastern Orthodoxy and Roman Catholicism listed above especially in that on many major doctrines including the Trinity and the full humanity and Deity of Christ they are perfectly sound. However, the issue of the Gospel is what seperates them from biblical Christianity.

The material principle of the Protestant Reformation was Sola Fide, meaning “by Faith alone.” This was the material or substance of the preaching of the Reformers. Sola fide then was the belief that faith alone is the instrument of justification without any meritorious works of man added to it.

Against the background of a Europe filled with the traditions of men, including priestly absolution, penances, indulgences, pilgrimages, prayer to the saints, etc., Martin Luther and the Reformers made the bold cry of “Faith alone.” This did not mean faith in isolation, or a dead faith that produced no works. This referred to a vibrant, living faith, for only a living and not a dead faith would result in justification. Faith without works is dead, and a dead faith will not save anyone (James 2:17).

In Romans 3:28 the Apostle Paul declared, “For we maintain that a man is justified by faith apart from works of the Law.”

Here (offsite) is a link to further study materials on Mormonism from Dr. James White.

Also recommended are two articles “The Book of Mormon: Fact or Fiction?” found here, and “Mormonism and the Gospel” found here.

In a related article, “How are we to respond when a Jehovah’s Witness arrives on our porch?” Dr. R. C. Sproul Jr writes the following:

One strange blessing of living in a relativistic and secular culture is that while we are continually being seduced into such a worldview, we are not often being directly evangelized into it. That is, the culture assumes a relativistic perspective. Its sundry media presuppose it. And we are pilloried for our “arrogance” for believing there is a truth that can be known. But there aren’t many prophets out there trying to persuade us of the truth that there is no truth.

There are, however, others who are eager to evangelize for their folly, the Jehovah’s Witnesses and the Mormons to list but two examples. We ought to be impressed by their zeal, and ashamed of our own lack of zeal. How we respond, however, may well depend on how we see them. Are these cultic evangelists deluded souls who are lost and in need of the good news? Or are they emissaries of the devil, seeking to seduce us with fables? They are both, and we need to forget neither.

First, beware the folly that sees these groups as mere denominations under the umbrella of the Christian faith. Jehovah’s Witnesses concede this. Mormons once did, but now are taking a different tack. These are people caught up in a false religion who will certainly suffer eternally unless they repent and believe on the Lord Jesus Christ. They are, from a certain perspective, coming to our homes to talk about spiritual things. Why not take the opportunity provided to speak the truth, to perhaps be used to bring in the elect from the four corners? Proclaiming the Good News is a good thing.

On the other hand, we need to be careful with our own souls and those under our care. These evangelists are not coming to our homes to find answers, but to persuade others of their own folly. They are smooth, polished, and well-equipped often with slick answers to our objections. Those who too proudly determine that they are immune from the wiles of these folks are in the end most likely to fall.

The answer then likely depends upon who you are, and how those who come respond. That is, if they seem to be open to actually considering the errors that have ensnared them, by all means speak life to them. If, on the other hand, you find yourself drawn in, or if God’s Word seems to be falling on deaf ears, by all means and with all speed, back away from the conversation. Do not risk your soul by being more pious than God, continuing to cast your pearls before swine, and failing to shake the dust off your feet.

← Prev: The Warning Passages In Hebrews Next: Yom Kippur – The Day Of Atonement → 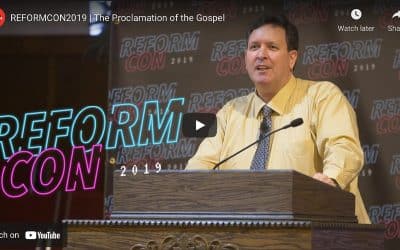 The Gospel of the Kingdom

"It was my privilege to preach the first session at ReformCon 2019 on the theme of 'The Gospel of the Kingdom'" -...

My Journey Out Of The Word Of Faith

This last Sunday I had the privilege of teaching/preaching three times at Reformation Orthodox Presbyterean Church in...